I don’t know about you but I have a serious love affair with a big time famous Hollywood film maker, Writer and Director. And it’s not who you might think. Or, maybe it is! I have been a huge fan (quite the understatement!) of writer/director, Nancy Meyers, for quite some time now.

From that glorious white house in Father of the Bride, to the slick New York bachelor pad in What Women Want, and of course that charming country home in Baby Boom – beautiful houses, combined with lovable characters and easily relatable story lines is Nancy’s winning combo. Although, it’s her more recent films which have been a hit worldwide for the homes and interiors as much as for the storyline, cast and acting – Somethings Gotta Give, The Holiday and It’s Complicated.

Given we live in the country now, I am drawn to country-style interiors more so than modern/city design, so the set design and interiors from It’s Complicated resonates with me a little more (aso because I love Santa Barbara and the ranch-style homes in California). Having said that, I also really do love the characters in the film, particularly ‘Jane’ (played by Meryl Streep). I have literally seen It’s Complicated at least 40-50 times and each time I watch it, not only do I feel warm and fuzzy, but I also pick up something new from the interior design that I hadn’t noticed before; a fabulous lamp, a great side table, the dining table, part of the gardens etc. If you haven’t seen It’s Complicated, then you really should!

Here are a few shots of the house from the movie (and a couple of others from Nancy’s other famous films!) And from Something’s Gotta Give… 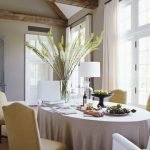