If there is one particular type of pattern that I truly love, and have loved forever, more than any other, it’s herringbone. Supposedly from origins dating as far back as the 16th century, it is a style of pattern that is characterised by rectangular lengths of wood, tile, stone etc that when assembled create a repeating pattern.

Now, you can be forgiven for thinking that chevron is also herringbone, because they happen to share a remarkably similar pattern, however herringbone is actually when the lengths or wood or tile (cut in perfect rectangles of course) are staggered so the end of one board meets the side of another (see below): The chevron pattern however is when the boards or tile are cut on an angle at their top edge and joined together with the adjoining board, thus forming a perfectly straight axis (see below): While both patterns are extremely beautiful, I personally think the herringbone, particularly when it’s used in flooring, is one that will never ever date (it certainly hasn’t yet!), gives a deep sense of character and history to a space and just looks totally and utterly elegant.
Here are some gorgeous examples of herringbone (although the first two are chevron as I had to include them because they were so beautiful!) I simply love this space above! Christian Anderson Architects I adore these floors. Via myscandinavianhome Blog Love the floors in this home by Mi Casa I also really adore herringbone in a bathroom. I think it looks modern and yet classic at the same time. Would you do a herringbone pattern in your home? 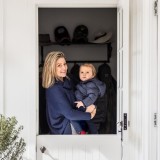 Interior and lifestyle photographer. Interior Designer. Stylist. Mum of 2. Wife of 1. Always with a camera in my hand and wishing I could live in a Nancy Myers movie! Southern Highlands, NSW.

An insect free summer in style